Robert Wolf was a reserved person – but his music is extraordinarily intense, his compositions touch the listener in a haunting way. As a child he learned piano, only relatively late he discovered the acoustic guitar for himself, which accompanied Robert everywhere from then on.

After a concert, he met Paco de Lucia, the flamenco god who had long become his role model. A friendship developed between the two musicians that significantly influenced Robert’s musical development. He matured into a fascinating guitarist who could inspire his audience with a lot of flamenco in the background and elegance in the style.

After Robert Wolf founded the band Quadro Nuevo together with the clarinetist Mulo Francel, he soon found himself regularly on stage. Over the years, he played a total of 2500 concerts with Quadro Nuevo and was soon considered an eminence of the local scene due to his experience and competence. For many years he also played unusual concerts together with Fany Kammerlander on cello and Reinhard Greiner on trumpet and flugelhorn in the Trio Faro.

But all at once everything changed: since a car accident in November 2008, Robert Wolf can no longer make music himself, and his own music also seems to be slowly becoming a thing of the past: “I can’t write any more pieces, because I need the instrument for that.”

Commissioned by the Bad Aibling Guitar Days in the fall of 2010, he was to rework his music with an ensemble of his choice to create a composer portrait for a concert evening. Wolf chose as a basis the string quartet Toxic Garden (Luciana and Mascha Beleaeva 1st violin and viola, Beate Palier 2nd violin), founded in 2009 by cellist Fany Kammerlander. He asked his friend Knud Mensing to interpret the guitar part with his own sounds, complemented them with Reinhard Greiner’s sensitive trumpet accents, and together with pianist and presenter Stefan Gabanyi worked out a narrative framework to guide the audience through the evening. It was an acclaimed concert and so the idea was born to record the Robert Wolf Project as a statement of a great musician also on CD.

As artistic producer, Robert Wolf had a decisive influence on the recordings. He succeeded in combining his music with the musicians he befriended to form a harmonious whole.

Classical music, South American music and jazz – this is how the spectrum of Robert Wolf’s music can be described. The selection of tracks on this CD includes intimate compositions originally written for Trio Faro, a waltz by Knud Mensing that he composed for Robert Wolf, recorded with guest guitarist Josho Stefan, as well as a Mexican folk song and even a work by composer Vladimir Beleaev created especially for this recording.

A quote from Victor Hugo says exactly what many feel about Robert Wolf’s music: “Music expresses what cannot be said and what is impossible to be silent about.” 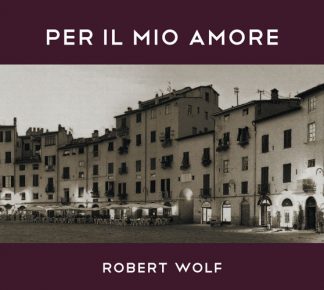