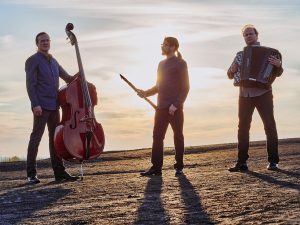 What happens when a classical clarinetist, a representative of new music on the accordion and a jazz bassist join forces? The result is called Firasso – the three musicians of this post-genre group have developed an earthy, gripping musical language, passionate, dynamic and rich in contrasts. The trio presents sophisticated original compositions that draw on the musical vocabulary of the tango and klezmer tradition, Balkan music and French musette. This sounds sometimes fiery and blazing, sometimes refreshing like a downpour in summer, sometimes intense like a strong ristretto.

For the musicians of Firasso, music has a lot to do with life. They tell stories of a walk through the autumn leaves, of chewing gum stuck under the heel, of uncertainty and fear in Corona times. Life is everything: exciting, sad, angry, cheerful, if you set your antennas to receive. And often also bizarre, as in the case of the whale that swam from the North Sea through the Rhine to just behind Cologne in 1966. When Rhine boatmen reported him to the police, they were subjected to an alcohol test.

Always the effect of this music is very immediate, it captures the listener with body, heart and soul. Each of the three musicians brings a backpack full of experience. In the band they have found an intersection, a common understanding of music and life. The look affectionate, melancholic, but also infused with quiet irony – and at Firasso sadness and wit are two sides of the same coin. “Tales” is the name of their debut CD, on which they present 13 self-composed groovy stories.