One conjures three rabbits from his hat, the next balances on a thin rope, a third juggles seven balls through the air. Chris Gall mastered an art, that more and more unfolds its spell the longer you listen to it. The pianist nonverbally tells stories that stay in your memory for a long time. Some of them have a cool tragedy, others almost nefarious cheerfulness, sometimes they come around the corner a bit bizarre, but now and then in great clarity. Such a narrative play on 88 keys is very rare, it comes almost exclusively in jazz to fruition, which might be the reason why Gall has dedicated himself to this genre.

Just listen to “Sea Lion Woman”, a traditional that was sung by Nina Simone and Canadian singer Feist and is now given a whole new depth by Chris Gall and his trio. Nobody tells us here, that the lady stabbed Galan in the back to marry the next best, and yet this wordless piece carries a laconic tragedy in itself. Accompanied by bassist Henning Sieverts and his younger brother Peter on drums, Chris Gall manages to produce a grandiose collection of nine soundtracks to wonderful films with his third trio album “Cosmic Playground”, whose two predecessors appeared in the series “Young German Jazz” on the ACT label. Nine soundtracks, which arise only in the mind of the listener and are guaranteed not always the same. However, what remains constant: no listener will leave the hall or the sofa without such pictures.

Of course, the narrative power of jazz is not something completely new, even Gall’s predecessors, such as Horace Silver, have summoned them and helped them to become treasures in the genre. Their rhymeless poems, however, still sound beautiful today, but for a good reason they are a bit antiquated. Chris Gall, on the other hand, uses the rich experience he has gathered in non-jazz formations to take his music away from jazz. After completing classical piano training at Boston’s Berklee College of Music, he played with the Indian fusion band “Taalsim”, performing with Chico César, the New York Voices and Nils Landgren, and accompanying Quadro Nuevo on both their album “Tango” and hundreds of concerts, even to Argentina.

None of these little breakouts or detours, whatever you want to call them, was a mistake, “Cosmic Playground” now reveals. “Arthur Dent Knows” comes along as a singer / songwriter piece, is actually about the surreal sci-fi posse “Hitchhiker’s Guide to the Galaxy”, but lost the singer in Orkus or anywhere else, on the way to the 42. And for the finale of his magnificent collection, Chris Gall recalls the intro to the Eighties dancefloor hit “Sittin ‘In The Dark” by Carolyn Mas in “Seven Beat Strut”. Bonds, hints and pointers, which are very rare to discover on a jazz album, but can also make the same for genre-foreign listeners to a really good friend. As already said: Pay attention to the words that are not spoken, it is worth a lot! 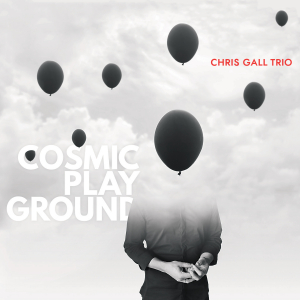