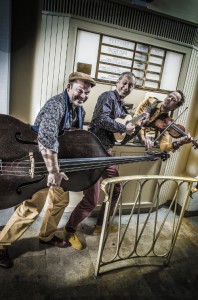 They play like young gods, yet today appear more human than ever. After many successful years on Germany’s stages with „Tango Five“, Bobbi Fischer and Veit and Gregor Hübner are above everything else now one thing: themselves.

Under the flag of their namesake – whether people think of the innovative Swabian entrepreneur’s wife or the steamboat that was named after her – the trio sail (or rather steam) out of their home port and venture out into more and more musical styles (Latin music, jazz, world music, chanson), and delve into the depth of thoughts and emotions that are suppressed all too often.

True artists with their respective instruments (piano, violin and double bass), they have traveled the world high and low and shared the stage with many of the big names in the music industry. But they never forgot their original berth, and listeners can tell by their lyrics and the subjects that they address again and again eloquently, and often in their native Swabian dialect.

But it wouldn’t be Fischer and the Hübner brothers if they weren’t also a little mischievous, so they produce hysterical laughter with one song, and goosebumps with the next. And goosebumps are inevitable when listening to their extraordinary music and the sincerity with which it is performed.

„Berta Epple“ combines many things that also belong together in reality:

Cosmopolitanism and a deep connection to one’s roots
Virtuosity and down-to-earthness
Wisdom and wit
The heavens kiss the earth. It expands the horizon!