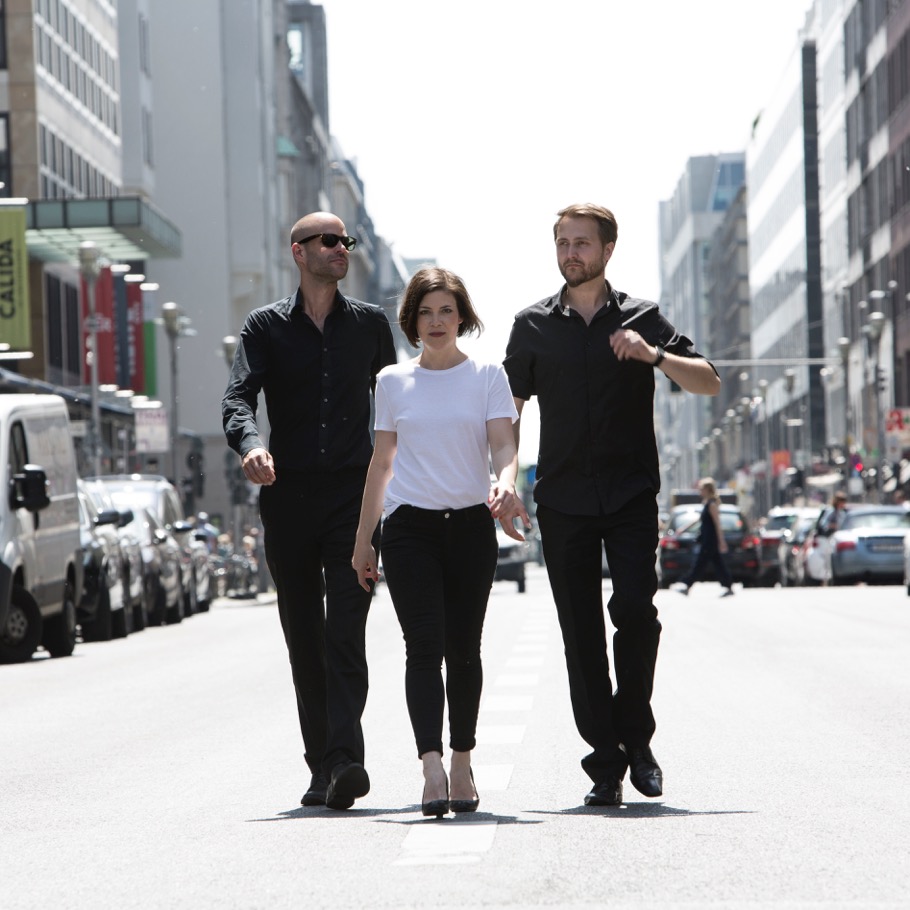 The music of the Klezmeyers has travelled far – the three Berlin instrumentalists merge Klezmer melodies with Flamenco, Jazz and arbic rhythms. In their virtuous playing, a music evolves that doesn’t deny it’s roots in tradition, and still surprises time and time again. Modern klezmer on the highest level.

Franziska Orso
Franziska was born in Berlin. Early, she discovered her passion for klezmer music, that was later on reinforced by repeated encounters with Giora Feidman, the band Kol
Simcha and Harrys Freilach. After participating in a klezmer workshop held by Giora Feidman, in 1997 she finally founded the klezmer trio Klezmeyers, which is still her chief musical project. 1998 she had a soloistic clarinet part in the movie “Der Laden”, Jo Baiers movie adaptation of Erwin Strittmatters novel. 2001 Franziska started her studies of classic clarinet, graduating in 2005. Since then, she was engaged in a range of musical projects. She soloed in numerous chamber music ensembles and orchestras, including the Berlin Symphonic Orchestra at the Berliner Philharmonie. In November 2007 Franziska could be heard at the Schubertiade in Hohenems (Austria), together with the soprano singer Annette Dasch. Since 2010 she is clarinet player and singer of the chanson-gypsy band Yukazu. She is also a lecturer at the Berlin Reinickendorf national musical school.

Robert Keßler
Born in 1984 Kessler grew up in Berlin and started playing the classical guitar at the age of 11. After his A-levels he studied jazz guitar at the Conservatory of Music „Hanns Eisler“ and at the Berlin Jazz Institute. His teachers were Manfred Dierkes, Kurt Rosenwinkel, Frank Moebus, Hubert Nuss, Claudia Hein, Sigi Busch, Jiggs Whigham, Gerd Miegel, Jeanfrancois Prins and John Hollenbeck. He was participating in workshops with Mark Whitfield, Aaron Goldberg, Marc Dressler, Chris Potter and Hank Jones. He intensively studied classical guitar literature, flamenco, Brazilian and acoustic guitar music. In 2006 he started the Robert Kessler Group (by then performing under the name of „Goya“.

Besides his work as a bandleader and composer he a very demanded sideman, being involved in CD productions and concert tours through Germany and Europe. Since 2007 he the guitarist with the musical and theatre productions like Hinterm Horizont, Mamma Mia‚ Ich war noch niemals in New York, etc. Since 2010 he has a teaching assignment for guitar at the Berlin College of popular Arts (hdpk), College for music Hanns Eisler Berlin and Jazz- Institut Berlin.

David Hagen
Lives in Berlin, born in Frankfurt/Main He started his musical career at the age of 14 playing bass guitar in rock and funk bands. Learning double bass when he was 18 years old and since then he was involved with many different Jazz bands and classical orchestras. Studying at the university in Mainz, Diplom Jazz musician. Since then freelancer in all categories of jazz and world music.

Press
“Franziska Orso succeeds in what you wish from a klezmer musician: that the playing with slim, rhythmically pulsating or excessively bent notes becomes the mirror of the artistic soul, which one can’t elude himself from. Franziska Orsos announcements between thrusting musical bursts are humble, but winning. […] Both accompanists of the clarinetist are lucky hits. The guitarist, Robert Kessler, whose playing varies effortlessly between jazz, flamenco and orientalism, attracted attention with furious riffs and floating chord progressions […] A perfect bass foundation was laid out by Tobias Fleischer who, inspite due reservation, put into play his virtuosity again and again. Together the Klezmeyers provided an accomplished interaction of chamber music that will be remembered.” – Fränkischer Tag

“… a perfectly attuned trio. […] the new album “Zirkusleute” (“circus people”) spreads the energy of of a live concert and is full of magical moments where loud and quiet notes sensitively alternate. It’s just fun, listening to them!” – Hessischer Rundfunk (hr-online.de)

“The Klezmeyers shake off the dust from tradition and polish old melodies, bringing new sparkle to them without neglecting the traditional values of this music – a balancing act not nearly every contemporary Klezmer band accomplishes.” – Jazzpodium

“An exquisite mixture of traditional and modern Klezmer” – Offenburger Tageblatt

“… the three studied musicians are real artists; above all, enthroned, the driving force of this furious trio, Franziska Orso and her clarinet.” – Berliner Morgenpost

“All without vocals the trio adapts yiddish instrumental-flair with many self composed and new songs. On “Zirkusleute” […], Feidman-alumna Franziska Orso puts lots of feel for dynamics into her Freilachs and Shers and controls expressive wistfulness just as well as gentle melancholy.” – JazzThing

“A passionate journey across the world of klezmer, that won’t stop at side trips into the realms of jazz either. Ref reshing and remarkably vivid music!” – Jazzdimensions.de