The great writer Gertrude Stein once said: “Jazz is tenderness and powerful violence.” A definition that has shaped the pianist Cornelius Claudio Kreusch already at the beginning of his career – and which now again perfectly applies to his new album “Eye of the Storm”. Whereby improvisation as the primal ground of these strong forms of expression is absolutely part of it. This already begins with the prehistory of the recording: Kreusch had asked the Munich Gasteig if he could shoot videos for his previous album “Transformer” in the Philharmonie before the hall would be closed for a long time for renovation. He was granted one day, but as they were setting up for the shoot, a personal moment of glory he had experienced there years ago came to mind: a Keith Jarrett concert. And so he spontaneously decided to improvise and record there himself on the grand piano.

For many jazz pianists, such an album-length solo improvisation is the supreme discipline, to which they must first approach for a long time by working with other musicians. For Cornelius Claudio Kreusch it is the starting point of all his artistic undertakings. Even his debut album “Talking To A Goblin” from 1991 was a solo improvisation. And while studying at the Berklee College of Music, he received the Berklee Performance Award two times in a row for exactly this high art.

The leap into the unknown, the challenge posed by the moment is, in a sense, the basis for all his diverse ventures, which have made him an internationally renowned piano artist. For his various band excursions, whether with “Black Mud Sound” into world music, with “Scoop” conquering the jazz charts into funk, with “Féfé” and “Mandala” into the Afro-Caribbean world of sound, with “Life Is Beautiful” into pop or with “Two Worlds One” into classical music. But also for his behind-the-scenes work, mostly done together with his brother, classical guitarist Johannes Tonio Kreusch, whether as producer, as festival director or as entrepreneur of his internet publishing companies MJM and “KreuschBros.” Again and again he came back to this primal ground of his music, to the lonely challenge for inspiration. Already in 2000 with the Grammy-nominated album “Live! At Steinway Hall/New York”, later with “Dolomites” and “Heart & Soul”, most recently with “Zauberberg” inspired by Thomas Mann and with “Transformer”.

And yet “Eye of the Storm” is now something completely different, something new. Not only because, in contrast to the often well-prepared confrontation with freedom in the past, it really was a spontaneous leap into the deep end. But above all because “for the first time I had the feeling of being an adult as an artist,” as Kreusch tells us. “Until now, the great predecessors and role models were always a source of inspiration. This time I was completely with myself from the first note. And suddenly I had a vision. I imagined my idols coming in one after the other and sitting down: Geri Allen came in, Kenny Kirkland, Herbie Hancock, Fats Waller, also Keith Jarrett, of course. Ahmad Jamal came in, Martial Solal, Gonzalo Rubalcaba, Jaki Byard. And this time they listened to me. That brought me full circle: I now know what I’m there for.”

A maturity and independence that you can hear on the album. Everything is an expression of the dazzling personality of Cornelius Claudio Kreusch, who is as extroverted and spiritual as he is grounded and consistent. As wild as it can get with the musical storm of thoughts, an almost classical undertone, immersed in inner listening, is dominant. And as much as every note, every chord, every change, every touch is unmistakably Kreusch, at the same time he succeeds in giving each improvisation part its own note. The subsequently found fitting titles like “Bring Me The Night”, “Thunder In The Sky”, “Truth Speakers Corner”, “Blues For Bobby” (by which Bobby Watson is meant), “Crystal Balls” or “Celestial Heavens” illustrate the journey from modern jazz passages to blues, to melancholic-balladic or spherical up to the raging current and hymn.

To bring the moment captured on the album together with what is currently occupying him on the longer timeline, Kreusch decided to still give his improvisations a framework, a structure. So even before the “Take Off” at the Philharmonie, the CD begins with the title track, also an improvisation, but almost a song, thus the most accessible and emotional. And it closes with “Hip Hop Piano,” played exclusively on muted and thus alienated grand pianos, a cheerful, forward-looking follow-up to the reveling “Epilogue” at the Philharmonie. And in the middle of the album, guest Gilson de Assis with his berimbao provides a brief respite, a pause for breath before the next mind-strike. Another “Eye of the Storm” so to speak.

Thus Cornelius Claudio Kreusch’s new work is a powerful document of an extraordinary artistic personality in full bloom. It lets you dive into jazz in its very own sense: Into the spirit of a music from the moment for the moment. Into the creative process in which time is suspended. In which the universe fills itself with perfect harmony and life with sound, light and unconditional meaning. In which one is in the eye of the storm. 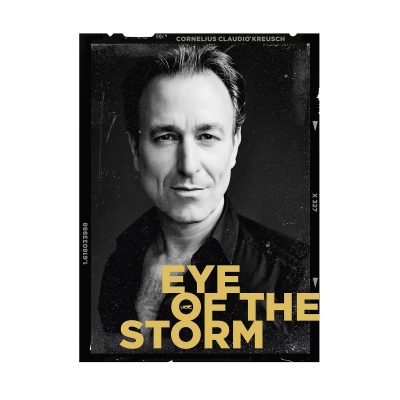 You're viewing: Cornelius Claudio Kreusch – EYE OF THE STORM
Choose your store!