The unexpected always seems logical with him, wrote one critic. On “Live in Ottobrunn” Martial Solal proves this from the very first note: Only one D is heard at first, which keeps you on tenterhooks until a pianistic whirlwind follows: expressionistic disharmonies dissolve into blue notes, glissandi runs lead into long sustained chords, classical motifs merge with echoes of half of jazz history. Everything is rhythmically varied in a highly complex way, without ever falling out of time. And only slowly does the standard emerge that provides the melodic basis: “My Funny Valentine”. As if under a burning glass, the first piece of the performance now documented as a double album at the Ottobrunn concerts in December 2018 thus already shows the entire high art of the “leading French jazz pianist,” as it understatedly says in the encyclopedia: Martial Solal, who has just turned 95, is a solitaire in the history of jazz, indeed in the history of music.

Born in Algiers in 1927, the son of an opera singer, he became interested in jazz early on with records by Fats Waller and Art Tatum. After the first years of practice, he oriented himself to the barely older Bud Powell and Lennie Tristano. With a small suitcase and some pocket money, he set out for Paris in 1950 by boat and bus to join the line of musicians waiting for work at Place Pigalle. But instead of accompanying the chansonniers in the vaudeville, he preferred to go to the Club Saint Germain to jam with the many Americans playing there. He quickly became the house pianist and remained so for a decade, accompanying countless U.S. stars such as Don Byas, Lucky Thompson, Roy Haynes, J. J. Johnson, Stan Getz, Kenny Clarke, Chet Baker and Sidney Bechet. In parallel, Solal also had his own quartet with Roger Guérin, and from 1955 his long-running, award-winning trio with Daniel Humair and Guy Pedersen; at the end of the 1950s he added his own big band. And already in 1953 he made his first record: with Django Reinhardt, who died soon after. Thus, in 1956, Solal also became the second winner of the newly created “Prix Django Reinhardt”, and in 2004 he also received the “Django d’Or”.
Together with his insatiable ambition to be as good technically as the great pianists of the classical period – which drives him to practice tirelessly to this day – these so different constellations were probably the best possible school for his own all-embracing style. Which manifests itself not only in the pianist Martial Solal, but also in the composer: In addition to numerous songs, he has so far left behind a series of chamber music works – for Elżbieta Chojnacka, Marcel Azzola Pierre Charial or Les Percussions de Strasbourg, for example – a collection of piano etudes and large-scale works such as the suite “Rhythmical Escape”, his Concerto for Piano and Orchestra or big band programs such as “Exposition sans tableau”.

And then there was also the “lottery win,” as Solal himself later called it: His friend Jean-Pierre Melville had introduced him to the young Jean-Luc Godard, and so in 1960 Solal wrote the film music for the latter’s groundbreaking first work “Out of Breath.” Which also marked another breakthrough for him: together with soundtracks by Miles Davis (“Elevator to the Scaffold”), Gerry Mulligan or Art Blakey, it marked the beginning of a new phase of film composition influenced by jazz. Solal subsequently wrote several more film scores, after a long break once again in 2000 for Bertrand Blier’s “Les Acteurs”.

His playing, completely consecrated to spontaneity, bursting with timbres and anticipating many of the stylistic and boundary transgressions commonplace in jazz today, may have been long ahead of its time with the public, but among jazz pianists he was a legend early on. Hordes of younger colleagues were inspired by him, especially by his solo playing. That’s where he’s “at his best, because he can do whatever he wants,” says Stefano Bollani, another great admirer. Live in Ottobrunn” also stands for this role model function. After all, Solal’s appearance in the Munich suburb – his penultimate ever, after he said goodbye to the stage in January 2019 with a concert in the Salle Gaveau in Paris – is the result of a decades-long relationship with Cornelius Claudio Kreusch.
Kreusch also found in Solal’s playing the blueprint for the creative daring that he himself envisioned in his early days. As contestants and jurors, the two met at major competitions. Over the years, it became an equal relationship, with each valuing the other equally. For example, Solal said of Kreusch’s “Zauberberg” solo album, “Cornelius masters the piano and jazz. He has an always alert imagination that allows him to be different. Something that has always seemed essential to me as an improviser. His ‘Magic Mountain’ is full of wonderful moments that sound new each time, from number to number, which is a really difficult task. He does it perfectly.” It was only thanks to this mutual appreciation that Kreusch, artistic director of the Ottobrunn concerts with his brother Johannes Tonio, was able to secure Solal for this last appearance abroad.
And so Solal once again spreads out all his qualities and wealth of experience on “Live in Ottobrunn”, whether on his idiosyncratic little “Histoire de Blues”, a sparkling Ellington medley, standards like “Tea For Two”, “Brother Jack”, “Cherokee” or “Round Midnight” or completely free improvisations of his own. All his virtuosity, all his inexhaustible creativity to find new punch lines in the moment. And last but not least his outstanding musical wit, for example when he turns “Frère Jacques” or “Happy Birthday” en passant into little jazz etudes.
“Live in Ottobrunn” is nothing less than the shining last example of the outstanding importance of Martial Solal. As a link between tradition and modernity, between genres and styles, between his predecessors and descendants. And for the core of jazz that is reflected in his style: In a miraculous way, the sum of the many twists and turns makes sense to him in retrospect. For the moment, for the respective piece and in the end for the whole album. A legacy. 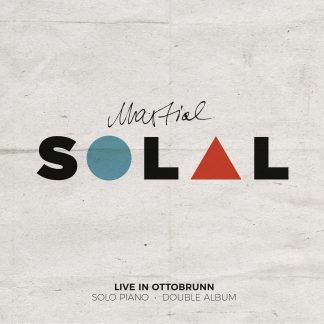 You're viewing: Martial Solal – Live in Ottobrunn
Choose your store!