JERMAINE LANDSBERGER – WITH HEART AND SOUL

Jermaine Landsberger, born in Vilsbiburg in Lower Bavaria and a long-time resident of Nuremberg, is an exceptional figure on the Sinti jazz scene. Already because he did not choose the guitar or violin typical for Gypsy Swing as his instrument, but the piano. Already at the age of 18 he was interested in modern jazz piano from Oscar Peterson to Keith Jarrett or Herbie Hancock, which “scared the Gypsy traditionalists a bit”, as he tells. On the other hand, the Sinti elements always remained part of his playing, which gives him a unique selling point to this day. His bands sounded and still sound unmistakable: the early trios from the mid-nineties with the Scottish jazz guitarist Martin Taylor; the collaborations with Biréli Lagrène, probably the most modern and open to fusion and jazz of all Sinti guitarists, with whom, of course, Stochelo Rosenberg has also often played; or his organ projects such as Hammond Eggs, in which jazz stars such as Pat Martino, Randy Brecker, Bob Mintzer or Larry Coryell participated. His current, new piano trio with drummer Donald Edwards and bassist Darryl Hall is even a complete New York affair.

“With this album I have fulfilled my heart’s desire. In recent years I have always had the desire to record an album with my own songs and my own handwriting, to make music that is close to my heart, music that reflects my thoughts, my inspirations and my inner self. Donald Edwards and Darryl Hall played an important part in this endeavor.” Landsberger said after the recordings were completed.

Landsberger’s companion at numerous concerts Randy Brecker contributed the liner notes, to be read in the digipack of the new CD. 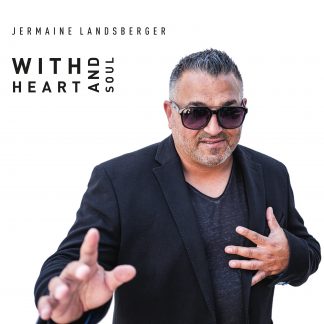 You're viewing: JERMAINE LANDSBERGER – WITH HEART AND SOUL
Choose your store!