Now it is here – the third CD of the El Violin Latino series by Gregor Huebner. As with the previous albums, the violinist and composer gathered an illustrious group in the studio and a collaboration of wonderful musicians emerged. The companions of Gregor Huebner have made this album a new milestone in his musical career. The incredible singer Yumarya from Curaçao, Edmar Castaneda from Colombia on the harp, Huebner’s band members Klaus Mueller, Jerome Goldschmidt, John Benitez, Louie Bauzo, Ludwig Alfonso, as well as musicians from previous recordings like Karen Joseph, Mappy Torres, Johnny Almendra and Ruben Rodriguez have inspired him for this recording.

As on the previous albums, original compositions penned by Huebner as well as Latin standards can be heard, among them familiar songs, but also found treasures. Where the previous albums covered the entire spectrum of Latin American music, this album focuses on the musical and rhythmic world of Cuba.

To illustrate the connection between jazz and Latin music, “Equinox” by John Coltrane, arranged in Cuban style, is the ideal composition to start this album, followed by “Obsesión” written by Pedro Florez, which is a well-known Latin Standard arranged in the style of Jerry Gonzalez’s Fort Apachee Band.

During the recordings of “Los Soñadores / Dreamers”, an original composition, there were magical moments in the studio. The title song of the CD is a commitment to the so-called Dreamers, the undocumented children of immigrants in the US, who are living in the insecurity of the current political situation, whether they may eventually live legally in the US or if they will be deported.

Videographer Richie Briñez, who was present in the studio, had the idea to make a video with frightening as well as very beautiful images documenting this insecurity in today’s society.

“Cuban Blues” composed especially for Yumarya and “South Sudan” are both compositions that Huebner has written for the band Salsafuerte and that go very well with the concept of Los Soñadores.

“Par Un Mejor Mundo” (For a Better World) is a new work by Huebner designed especially for the duo of harp and violin. Edmar on the harp made this composition something special.

With “Zapato Apretao” and “Llanto De Luna” Huebner takes us back to the late 90’s when he was a member of Johnny Almendra’s band Los Jovenes Del Barrio. These two compositions are in the tradition of Cuban Cheranga music.

With the last composition “Buey Viejo” Huebner re-recorded a composition from his first album, which emphasizes the unique voice of the poet Mappy Torres. Unfortunately, Mappy Torres passed away in early 2018 – without her the idea to El Violin Latino would never have existed. 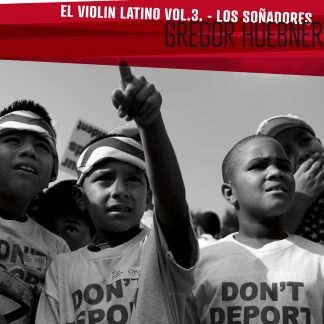