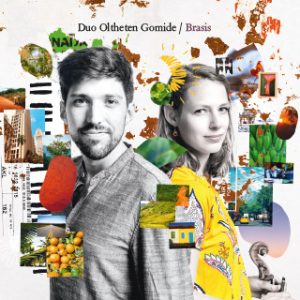 Brazil was declared the “Land of Bossa Nova” with the million-fold success of the album “Getz/Gilberto” in the 1960s, as if it had been transformed overnight into the figurehead or postcard of a single musical style. But this was far from being a new phenomenon for the country. Years before, Carmen Miranda had already enchanted Hollywood, with the result that not only Brazil but all of South America was reduced to one figure: the stereotype of the cheerful, exuberantly partying, carnivalesque and naive samba musician.

In a bid to introduce the world to an underwater part of this musical iceberg that is Brazil, the duo of Daphne Oltheten (violin) and Henrique Gomide (piano) delve into the works of previously little-known composers. Some of the collected beauties can be found among the 12 tracks on this album, which couldn’t have been more aptly named: “Brasis”, in Portuguese the plural of Brazil (Brasil).