When an artist and his work break through the frontiers of his home territory and achieve wide international acclaim, people tend to talk about the benefits – of which there are many – while generally ignoring at least one prejudice: the distorted and unjust musical generalization of a nation.

In the case of Brazil, this has happened before. In the 1960s, the record “Getz/Gilberto” – which brought the Brazilian artists João Gilberto, Tom Jobim and Astrud Gilberto together with the North American saxophonist Stan Getz – sold millions of copies, won Grammies and stayed on the Billboard charts for almost 100 weeks. The consequences? Brazil became “The Country of Bossa Nova”, as if the country transformed into a commercial label, a sort of picture postcard of a single musical style.

That phenomenon was no novelty. Years earlier, Carmen Miranda hypnotized Hollywood and, because of this, not only Brazil but all of South America was reduced to one single thing: the reductionist stereotype of cheerful, festive, carnivalesque, naïve and simplistic Samba.

As if it were possible to translate into just one musical genre a country of continental dimensions which has produced countless styles such as forró, choro, maracatu, samba, baião, waltz, maxixe, toada, embolada, catira, ijexá, pagode, jongo, repente, etc., all of them created for the most varied instrumental formations and also in the form of song.

With the intension of revealing to the world a submerged part of this musical iceberg called Brazil, the duo formed by Daphne Oltheten (violin) and Henrique Gomide (piano) have plunged into the works of composers still little known around the world. Part of the beauty gathered by the violinist and pianist are the 12 tracks on this album which couldn’t be christened with any other name than “Brasis” – Portuguese for “Brazils”.

One of the composers the duo pay homage to is Elomar (Elomar Figueira de Melo), a sort of minstrel creator of songs and extremely complex works – both in poetic and musical terms – that find inspiration in the motifs and traditions of his country, where he lives isolated from the two great Brazilian urban centers/metropolises. His work can be imagined as a duel between Shakespeare and Cervantes in the middle of the caatinga in the interior of the state of Bahia. Oltheten-Gomide perform his work “Bespa”, the opening of the opera “Auto da Caatingueira”.

Henrique and Daphne also elaborate on the compositions of other great modernizers of Brazilian music at the beginning of the 20th century. From Garoto (Aníbal Augusto Sardinha, 1915-1955, considered the “father of modern Brazilian guitar”), the duo present the pieces “Desvairada” and “Debussyana”, along with the absolutely beautiful yet nearly forgotten waltz “Luar de Areal”. This is the first time that Garoto’s jewel has been recorded since the 1950s, when it was performed on Brazilian’s national Radio by the violinist Fafá Lemos accompanied by the composer himself on guitar.

From the other great composer and arranger, the Pernambucan Moacir Santos (1926-2006), Henrique and Daphne perform “Flores” and “Vaidoso”, the latter with the participation of the German trumpet player Matthias Shcriefl (winner of the German jazz prize “Neuer Deutscher Jazzpreis” in 2019). In these two choros, as well as on the rest of the album, the praiseworthy intention of the Oltheten-Gomide duo is clear: to uncover the beauty of these two compositions without over-deconstructing them; after all, they are presenting the works of artists here who even today remain restricted to a small bubble of listeners.

Apart from Moacir, the revelations continue with pieces from other artists born in the northwest of Brazil. The duo plays “Canhoto” from the Pernambucan accordion player Mestre Camarão (Reginaldo Alves Ferreira, 1940-2015), “Montreux” from the Alagoano and multi-instrumentalist Hermeto Pascoal.

Another musician the duo included in the program is Guinga (Carlos Althier de Souza Lemos Escobar), who, put simply, is one of the great world composers of today. Raised in the suburbs of Rio de Janeiro, the violinist and singer combines as no one else an infinity of influences that range from the various Brazilian traditions to the different languages of jazz and classical music. Like other renowned musicians including Esperanza Spalding, Michel Legrand and Paco de Lucia – who described the Brazilian artist as follows: “I wanted to trade my musical universe for his” -, Gomide and Oltheten were also hooked by Guinga’s sonorous paintings. From him, they have included the works “Pucciniana” and “Meu pai” (with vocals by the Venezuelan Yma America).

Among pieces by contemporary and younger composers, the duo chose to record “Quase Caindo”, by the violinist Ricardo Herz, with the participation of the Dutch drummer Antoine Duijkers and his interesting percussion set with tambours from Mali and Senegal. The repertoire also includes “Shot #4”, a composition by Henrique Gomide, in partnership with the drummer João Fideles, long-time friend fellow member of the piano trio Caixa Cubo.

Before this project named so adequately “Brasis” – Brazils – we can only express our gratitude to Daphne and Henrique for helping to sow the seed around the world of an important part of the rhythmic, harmonic and melodic richness that sprouted so fruitfully in Brazilian music soil. (Lucas Nobile is a journalist and the author of “Raphael Rabello: o violão em erupção” (2018), “Dona Ivone Lara: A Primeira-Dama do Samba” (2015) and some of the volumes of “Coleção Folha – Tom Jobim” (2013). He worked as a music reporter for the newspapers Folha de S. Paulo and O Estado de S. Paulo, besides having had successful collaborations for Instituto Moreira Salles (IMS – Rádio Batuta), Apple Music, O Globo, Bravo!, Rolling Stone, Clarín, Carta Capital, UOL and Prêmio da Música Brasileira.)

Be the first to review “DUO OLTHETEN-GOMIDE – BRASIS” Cancel reply 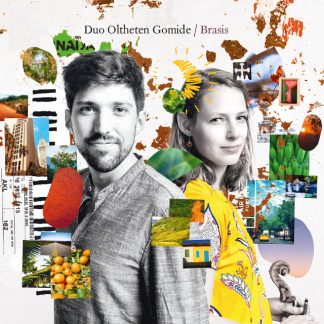