An album that is definitely different from all previous ones by Quadro Nuevo.
Full of archaic power, bronze timbres and primal rhythms.

There were inspirations.
Odysseus’ swashbuckling journey back to the old homeland.
Aeneas’ search for a new home.
Icarus’ flight and flight to freedom.
Jason and his Argonaut companions hunting for the Golden Fleece as a symbol of power, wealth, luck, or even wisdom.
The great journeys, interwoven a thousand times with the gods and myths of antiquity, became central epics of Western culture.

An adventurous collective around the band Quadro Nuevo traced these questions.
The answers should be neither scientific nor political.

“Like children on a great adventure playground, we sail through the myth-enshrouded world of the Aeolians.
Mediterranean islands far removed from our digital high-speed age. Bubbling volcanoes, blue sea depths, rocks like sculptures formed by an artist’s hand.
Jason and Aeneas strayed here, Odysseus forgot time with the nymph Calypso.
And it is quite possible that Icarus, on his flight to freedom, looked down from high above into Etna or Stromboli.

We read and philosophize, immerse ourselves in millennia-old stories. We develop scenes together. With great enthusiasm, we capture our fantasies in photos and stage videos. In this way, we meet gods and heroes in the flesh.
The sorceress Circe on a southern Italian junkyard or Athena proudly on black rock. Odys-seus on the run from Poseidon, recently adorned with an octopus as a headdress. Now, however, he ages as a sea god in plastic regalia.
Hephaistos forging in the sulfur steam, Zeus self-confidently moaning in the archaeological excavation field.
The Golden Fleece unites Medea and Jason in the holm oak grove at the foot of the mountain.
Demeter, chaste in the fruit-bearing garden. A few hundred meters further Dionysus in the lustful Bacchanal with drumming fauns and teasing nymphs.
As oblivious as the exploring children, we don’t even notice that we, too, celebrate a similar feast every evening. To wash away the heat of the day with Malvasia, the heavy wine that came here from the Peleponnes in ancient times.
Companions united by nightly conversations near the sea.
About the sweet life, about plastic and other garbage, about flight and displacement.
The morning after, again looking for the washed-up wings of Icarus and finding Penelope on a lonely beach, spending her 20-year wait gazing into the distance through artful yoga.

And then there’s Homer. He travels with us. Reads from the oldest books of mankind.
In these encounters we invent songs. Our melodies meander around the figures of ancient sagas.
So that they may be inspired by them. May their Bronze Age splendour illuminate our thoughts and sounds.
And that perhaps, in the passing, a little heroic gold dust may cling to us all.

Be the first to review “Quadro Nuevo – Odyssee” Cancel reply 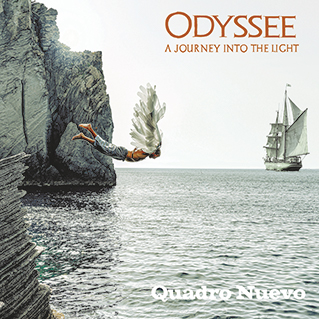